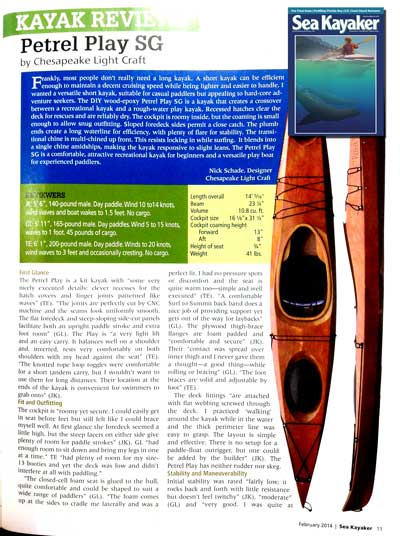 It is an honor to have my Petrel Play reviewed in final issue of Sea Kayaker Magazine.

"The Petrel Play lives up to the 'Play' in its name. It was quick and nimble in the waves, not bothered by the wind, and inst very comfortable fit made it a pleasure to be in. Lots of fun."

But that isn't really what I feel like talking about...

I probably started reading Sea Kayaker in about 1986 or so, after I had built my first kayak. I had already been kayaking on the sea for awhile, but using a kayak specifically designed for the task was still new. I would put on a t-shirt and bathing suit and my $25 life jacket and head out on the ocean. They taught me to paddle more safely.

It was through the influence of Sea Kayaker that I learned what the sport was all about. It had the definitive articles about how to safely go out to sea in a small, unstable kayak. In the pages of the magazine was the combined knowledge of the best, most skilled, and most experienced kayakers in the world. They included articles on safety, technique and destinations as well as detailed technical reviews of sea kayak designs.

Those reviews were a big influence as I designed my boats. They had in depth discussions of the kayaks from several different reviewers, but more interesting to me, they provided non-subjective technical analysis of the boat performance including stability and efficiency curves. Contributors like Matt Broze and John Winters helped educate paddlers on what made kayaks work.

In providing this scientific type analysis, they acknowledged that kayaks perform the way they do for specific reasons. They tried to break through the mythology and marketing to get at hard, verifiable data.

With my background in engineering, this was exciting and interesting to me. As a boat builder, the magazine hooked me by including detailed articles on do-it-yourself projects, up to and including building boats.

As I developed more designs and started Guillemot Kayaks as a business, I turned to Sea Kayaker to help publicize my small business. In the October 1995 issue, they published How to: “Strip Building a Kayak”; Instructions for a strip-built kayak my first foray into writing about how to build kayaks. This article served as a jumping off point when I later started working on my first book and in a very real sense served as an introduction to the sea kayaking community for me and Guillemot Kayaks.

Over the years the magazine has served as community center for sea kayakers around the country and beyond. Their focus on safety and technique helped many paddlers become better and safer kayakers.

Unfortunately for the magazine they were growing during the same time as the internet and the world wide web. A magazine that comes out every other month has a hard time competing at community building with websites and forums that can update by the minute. Sea Kayaker was late getting into the game with a solid website and lost out on the potential to expand into the web as a early adopter.

The business model for all print publications are in flux and the rapid growth of sea kayaking as a sport has peaked, so the niche Sea Kayaker held became hard to survive in and they chose to step away before they had no choice. Word has it that they are going work on maintaining an online presence and expand their focus to open water paddling of all types from SUPs to kayak fishing. I'm looking forward to what they do.

I want to thank Chris Cunningham and all the folks at Sea Kayaker for the years of support for the sea kayaking community, and in particular the help they have provided me personally and Guillemot Kayaks at making a place for us in that community. Thank you for the nice review on my Petrel Play and I hope you have fair winds for your future endeavours.