Sometime back in the mid to early 1990's I read an article in WoodenBoat Magazine about building an icebox. I just did a little research and found the article. It was "Building a Proper Icebox" by Jim Brown in WoodenBoat Issue #99. You can read the article below. This is where I first came across the idea that a thick mixture of powder and epoxy has a name. What Jim said was:

In some boatshops, epoxy mixed with nonstructural thickeners, like fumed silica, is known generically as doukei (pronounced to rhyme with "cookie"). Whereas, epoxy mixed with reinforcing fibers, such as wood flour or syntetic flock, is called schmutz Ithis word rhymes with the apparent plural of foot, i.e., "foots"). If the epoxy is mixed with both thickeners and fibers, which is often the case, it becomes, logically, doukeischmutz. (Yes, it rhumes with "cookiefoots") The two roots often are used singly and interchangeably.

Well, the moment I read this, I now knew I had a word I could use. I didn't need an icebox, but I certainly needed a word. I was using that very substance while building kayaks and the word became part of my lexicon. Back in 1995 I started writing my first book and seeing as I used the stuff all the time and needed to include it in the book. Unfortunately, this was back before the world wide web, google and instant access to all kinds of information. I remembered the article, but didn't remember how the word was spelled. So, I made up my own spelling.

Back in 1997 I started a bulletin board for people interested in building kayaks. This eventually became the Kayak Forum where first time and experienced kayak builders come together, ask questions, share experience, swap ideas and generally help each other out. As of the moment I'm righting this there have been 212,352 messages exchanged on the boat.

This community has taken on a life of its own. Back in the first days I answered every post that came up just to make it look like the bulletin board was alive, but pretty soon lots of people were posting. in the 14 or so years since the BBS started there have been a lot of regulars who have been happy to help the many more transitory visitors who come in looking for advice, get it and move on. These regulars have become the heart of the Kayak Forum. Some of the regulars have moved on. Mark Cantor used to pipe in on every post. LeeG always had an opinion. George Roberts always had a negative opinion. Russ! was an enthusiastic kayak building evangelist (last I knew he was lowering himself out of helicopters in Afghanistan). Ross Leidy has contributed a great kayak design application and now has an active forum of his own. Rob Macks of Laughing Loon Canoe and Kayak has been a long time contributor bringing his perspective as a professional boat builder to help everyone.

Now we have Bill Hamm who is free to share his experience. Kudzu (Jeff Horton) who is doing great things with fuselage frame boats. And there is Robert N Pruden.

I first became aware of Robert when he paddled over a waterfall a few hundred yards into a trip in Canada. He has evolved from a seemly hapless paddler to one of the wise old masters on the forum. He encourages new builders and enthusiastically reports about his own experiments and experiences and contributes advice and humor in good measure.

One of the additions he is instituting is the Dookey Schmutz award to honor those who are passionate about kayak building and contribute to the Kayak Forum. For a while I was posting a tongue-in-cheek award every time a posting milestone was acheived - the 1,000th post, the 10,000th post etc. These awards generally involved some assemblage of epoxy encrusted items that were in my garbage. The winner was free to pick up the award upon coming by my shop. Robert has one-upped this award by actually being willing to mail out the assemblage.

I am deeply honored to be the first recipient of the Dookey-Schmutz award, shown below and seen dancing in my previous posted video. Thank you Robert and thanks to all who contribute to the Kayak Forum it is a real honor to be a part of such a great community. 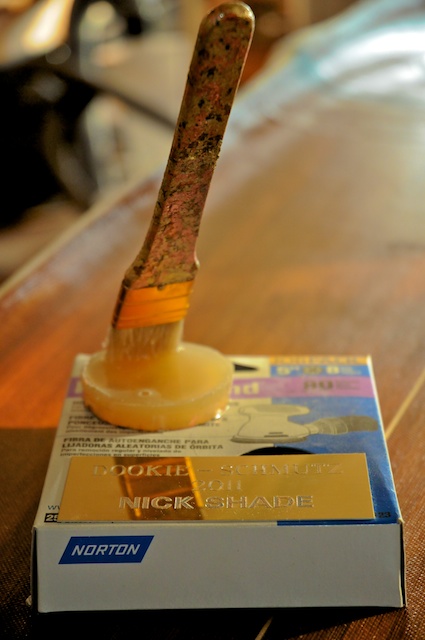