This year after the Wooden Boat Festival in Port Townsend, Washington with Chesapeake Light Craft, I volunteered to drive the Ford Flex back to Annapolis towing the Outrigger Junior on the trailer, caravaning with Joey Schott from CLC. The pay off for spending four days driving across the country was we could spend some time paddling. I really wanted to check out Deception Pass and I thought the best guy to show us the area was my friend Warren Williamson. Warren is a paddler, boat designer and builder in Anacortes, WA who has spent a lot of quality time at Deception Pass. Nobody knows more about kayaking in the turbulent waters of Deception Pass better than Warren and he is a supremely skilled paddler. Luckily he had time available and we arranged to meet him in time to paddle the flood at the pass. 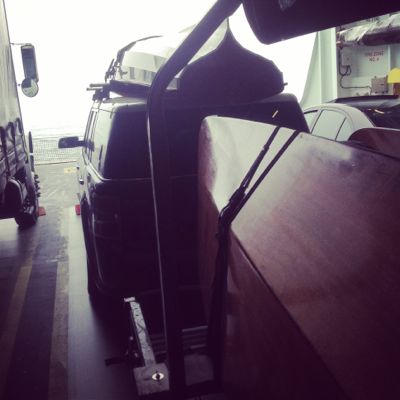 Deception Pass is a narrow passage separating Whidbey from the mainland. With a large tidal differential between the two ends of the sound it has significant tidal currents of up to 8 knots. While it is narrow by the standards of the surrounding waters, by the standards of east coast waters it is quite wide for a reversing falls. It is also quite deep. As a result there is a huge amount of energy rushing through the restriction under the Deception Pass Bridge. This energy creates large whirlpools and boils and in the right conditions can create standing waves. It is a very dynamic paddling environment.

Joey and I were scheduled to take the 6:30 ferry from Port Townsend to Coupeville but it filled up with Joey and the big trailer being the last vehical on before I could load on so I had to wait for the next ferry. This was to put us a little behind for catching the optimum currents through the pass, but we had plenty of time.

I eventually was first on to load on the next ferry. I met up with Joey on the far side and we headed up to meet Warren at the put in at the state park on West Cornet Bay Road. There was plenty of parking for the two long trailers and an easy put in at low tide by the boat ramp. Another person to show up was Kiliii who was working on a photo shoot for Canoe and Kayak Magazine and heard that we were headed out to play. After meeting with us he headed to the bridge to set up.

Between the two CLC trailers we had plenty of boats to choose from. I chose to use the Petrel Play. I had worked on this particular boat as a demonstration at Canoecopia several years ago and Joey had finished it up at the CLC shop. Joey went with the Shearwater Sport that my brother Eric had built. Warren was in a Greenland style kayak of his own design. 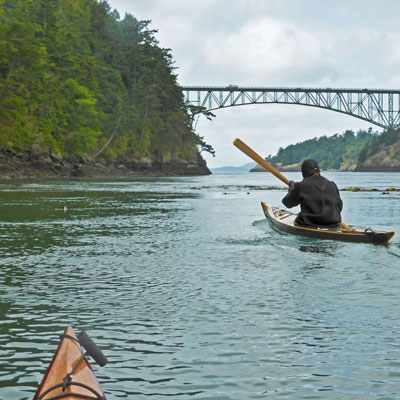 We headed directly out past Ben Ure Island. The current was already flooding in so we crossed over to Pass Island and paddled up into Canoe Pass where we landed on the north side and carried our kayaks above the strongest currents.

The scramble of the rocks was a bit tricky while carrying the boats, but we teamed up two to a boat and accomplished it fairly quickly. We ate a few snacks before heading out.

Warren's plan was to paddle out on the west (upstream) side of the bridge and then drop down into the eddy on the south side of the pass. This area is affectionately known to kayakers as the "Room of Doom".

Not knowing exactly what to expect, Joey and I stuck pretty close to Warren and watched where he broke across the eddyline. He cut across about hundred feet below the top of the eddy and we followed. This proved a pretty easy crossing and allowed us to pull along shore where it was calm with a slow but steady eddy current moving back up to the top of the eddy. 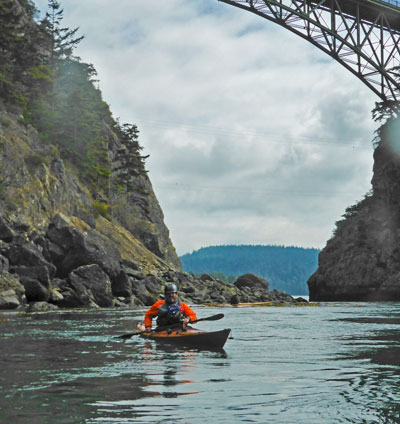 The huge volume of moving water and produces conditions unlike anything I have seen on the east coast. The closest I can think of is the reversing falls at Cobscook Bay which I paddled through in a Grumman canoe when I was about 16 and remember looking down into whirlpools at rocks the size of hay bails. But the scale at Deception Pass is much larger.

In the flood eddy line starts at a rocky point directly under the bridge and diverged away from shore from there. About 50 below that initial point is another ledge point sticking out into the eddy. Between these two points is a static boil where the water swells upwards from the depths. This upwelling of brine heaved up at irregular intervals, rising about a foot over the surrounding level over a region about 20 feet in diameter.

As the boil errupted it pushed water out from the center shoving anything in its way away towards its perimeter. This outward flow caught me a few times sending me careening into the ledgy point. Paddling Deception Pass can be hard on your boat. I ended up slamming the ledgy point several times. Kiliii had found his way to the rocky ledge to shoot photos and had several close up observations of me scraping up the Petrel Play

Once past the ledgy point beside the boil, the eddy followed a steep down slope hard up against the barnacle covered rocks. There was little need to paddle to get a quick ride up to the head of the eddy. The primary exersize was keeping the kayak from getting pushed hard against the barnacles by the upwelling water from the boil.

With a quick clockwise spin the kayak gets pushed out through the current line. The edge of the eddy gets progressively wider as it extends away from the head. This edge alternates between large boils and big whirlpools. The boils lift up and the whirlpools suck down, grabbing your boat and spinning it around and around.

Warren was very at home playing in this turbulent boundary between eddy and current, doing rolls and sculling braces as his kayak got spun this way and that. I was considerably less confident. When I got flipped it took a couple tries to roll back up. I tried switching sides, but was met by a hard wall of moving water so I had to go back to the original side. 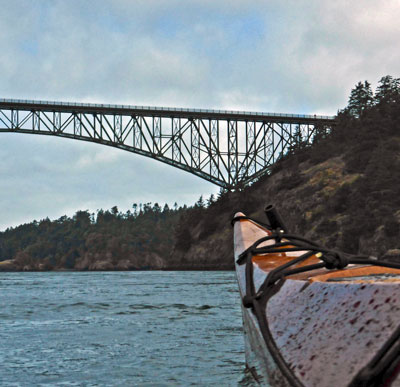 Much of the fun was just watching how the water moved in and around the area. Kiliii had a great vantage point to take in the dynamic environment. The Room of Doom is an amazing example of the power of water and a really fun spot to paddle.

We played around for a little over an hour and then went back over to Canoe Pass to see how it had changed as the tide came in. We had a long drive ahead of us so headed back to the take out before we got too tired.

We took out and headed into Anacortes for pizza with Warren and then Joey and I headed on to find a hotel near Seattle to formally start the journey back east.

It was my first time driving across the country and it was actually fun to spend all day in the car seeing a new part of the country every hour. But the best part of the trip was the few hours we got to spend splashing in the Room of Doom. 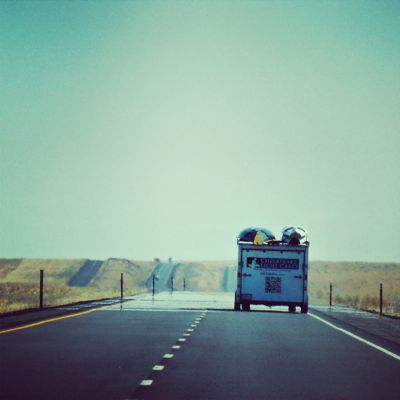