A few months back I saw an image on Facebook that looked familiar. It was an early rendering of the Tahe/Zegul Marine "Baidarka":

What caught my eye was the straight sheerline that sweeps down at the stern. It immediately reminded my of my Aleutesque:

This is a design I created in 2002 based on the baidarka "MAE 593-76" from David Zimmerly book Qajak: Kayaks of Siberia and Alaska. I kept the straight sheer of the original baidarka but at the stern I swept it down to create a bit of a transom shape at the waterline, keeping the wide stern of the original. At the bow I didn't do too much beyond fill in the bifurcation of the original boat. I was building with strips instead of skin so a true bifurcation didn't make sense, but I kept the narrow lower have and beamier wider half of the MAE 593-76. I also kept the cockpit location quite far aft of amidships. Unlike the MAE 593-76 design I added rake to the cockpit so the coaming was higher at the front than the back. Baidarkas characteristically have fairly level cock ring. I've got offsets of the MAE 593-76 design if anyone would like to build it. In the drawing below I drew a coaming ring the sloped down on either side of the deck, this does not match the original boat.

Notice that the original boat had very little rocker, with a very straight run aft it would be a straight tracking boat. My ideas about the stern shape required the keel rise back up to the surface at the stern and I felt the bow should just kiss the surface. This necessitated a fair amount of rocker. I knew this would loosen up the tracking a lot relative to the original design. I anticipated that I would need a skeg and indeed I ended up adding fixed skeg on my prototype because it was easier than making a retractable one at the time.

I discuss the design evolution of Aleutesque here. I really like the design and feel I broke some new ground with the shape of this boat. The design is striking in appearance and performs very well. It is one of my fastest paddling designs yet is maneuverable and fun to paddle.

I've never seen another kayak with the downwards sloping sheerline before and I always get a positive response when people see and paddle the boat.

Now, all of a sudden I was seeing a very similar shape on Facebook. I downloaded the image and tried a little comparison with my CAD drawings of my Aleutesque. I was amazed at how well things lined up. From the bow back the Zegul design had a dead flat sheerline that then curved gracefully down to the stern. The stern above the sheer was high and continued the line of the sheer back straight. This was an almost perfect match for my Aleutesque. The only real difference was the bow. The Zegul Baidarka had an abruptly up-sweeping horn at the bow. But the lines of the deck were a very close match to my Aleutesque. The foredeck sloped in a straight line down from the cockpit and the aft deck ran straight back to the stern.

It looked pretty clear to me that the Zegul Baidarka was reading from my design book, but it was hard to tell that much from the little drawing on Facebook. For example it was not apparent if the bow had the pinched in shape that refers to the original bifurcation, and all I had to compare was the profile view. Much of what made my Aleutesque what it is is only apparent from the plan or top view. I couldn't determine how much of a copy of my boat the Zegul boat was without more information

Sea Kayaker magazine recently did a review of the Tahe Baidarka. This provided some more views of the design. Just visible in the profile is a slight pinch near the bow, but it was obvious that the plan shape was quite different. Unlike my Aleutesque and unlike the original baidarka, the bow was very narrow. It had none of the added volume above the water that is characteristic of the baidarka style. And the stern gradually tapered back to a point. The plan view showed significant differences from my design, but interestingly for a design called "Baidarka" it was even less like a baidarka than my design.

The Zegul Baidarka really has very little in common with the original baidarkas. It comes to a point at both ends, has almost no pinching at the bow, no transom-like stern, a lot of rocker. It looks like a nice design but even less of a baidarka than my Aleutesque.

When I read the review in Sea Kayaker, I was immediately struck by the wording of the design statement from Zegul. It starts out:

The word “baidarka” is actually a Russian word. It is the diminutive form of “baidar” which means “boat” so “baidarka” means “small boat”.

The kayaks made by the Aleuts were unique in form and construction. The most obvious feature is a “bifurcated” bow. There has been a lot of speculation regarding the function of this bow form. The ad- vantage of this shape is at the waterline; the lower ”jaw” can be narrow and sharp, giving a fine entry into the water for good efficiency, while higher up the upper “jaw” can be full and wide for high buoyancy to lift the bow over waves.

These are straight quotes from my discussion of the baidarka shape here. Now, I'm really surprised. I understand that Zegul is a Swedish company and Tahe Marine is based in Estonia so English is not their primary language, but I find it amazing that they are so unsure of their ability to communicate the benefits of their design that they have to crib language from my website that I wrote in 1999. What is up with that? They not only use these words for the Sea Kayaker Magazine review design statement, they use it on their website, their product brochure, print advertising and catalog so it is not just an isolated oversight.

So, How Should I React?

Kayak design and boat design generally is a process of evolution where each generation of designers observe the work of prior designers and watch what their peers are up to and adapt these ideas into their own work. My Aleutesque is a prime example of this design evolution. I acknowledge that from the start and am explicit in what I had done and where I got my inspiration in my description of my work. I feel duty bound to give credit where credit is due. But, I think in the process I have created a new kayak that I can be proud of. I think it is unique in a variety of ways even if the uniqueness is a result of incorporation of existing ideas in a novel manner.

The Zegul "Baidarka" is in that tradition. And it would seem at first blush that they are giving full credit to their source of inspiration. They go into some detail in the design description of how they are inspired by Aleut baidarkas. To read their advertising copy you would reasonably assume they studied traditional Aleut designs and interpreted it in their own way.

If you look at the Zegul "Baidarka" there is really nothing remotely "baidarka-like" about it. The unique features of baidarkas do not appear in the Zegul boat. There is no bifurcation and the stern shape does not resemble the original baidarka's in any way. The only real reference to a baidarka is through my boat the Aleutesque. The sheer line of the Zegul boat is a very close match to my design and the over all hull shape is quite similar to the Aleutsque. The Zegul "Baidarka" seems to be called a "baidarka" because I say that is where I got my inspiration for my boat, not because the Zegul boat is actually anything like a baidarka.

One review of the Zegul boat says of the stern: "...there is no other kayak like it. A traditional Baidarka of the Aleut islands has a different stern than the interpretation of the Zegul." I'm sorry Gnarlydog, but this statement is incorrect, the stern is very much like the Aleutsque. 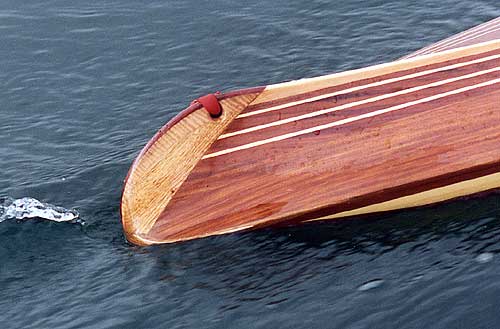 I include quite detailed lines for my designs on my website. It is not hard for someone skilled with CAD systems to use the data I publish to create electronic models of my boats if they are interested. It looks to me that Zegul was interested. I can not complain about that and can take some pride that I my work caught the attention of a company that builds some quite fine boats.

However, when that unacknowledged design reference is combined with a complete copy of my own words to describe their interpretation of my design I start to feel I should react a little more forcefully. Sea kayaking is a small, close community. To a substantial degree we are all dependent on each other for the continued growth of the sport. It seems counterproductive to antagonize other members of this community, but Zegul chose to act as they did and this blog post is my reaction.

The folks at Zegul have issued an apology in Sea Kayaker Magazine. They said that their ad agency used the text without their knowledge. They never really acknowledge the influence of my design on their design, but as I said, boat design is a process of incorporating earlier desigs with new ideas to create something original. The Zegul "Baidarka" looks like a fun boat, and they are taking a risk in bringing such an unusual boat to the market. I hope their efforts meet with success.